Next to arrive at the party is Cisco, with their Nexus 3064, 1u switch, with 48 dual-speed 1G/10G SFP ports and four 40G QSFP ports, 1.28Tbps of switching, 950Mpps, 9MB of packet buffer, front-to-back airflow for friendly top-of-rack deployment, etc, etc.

Whoa! Anyone else getting deja vu! 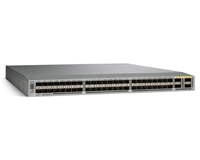 Are they related? I think we should be told!

(With apologies to Private Eye’s “Separated at Birth”)

Both switches are so similar that they even offer the ability to plug a “breakout cable” into the 40G QSFP ports and turn each one into four 10G ports, giving you a 64x10G port system.

They even outwardly look like relatives, just some slight differences in how the face-plate looks, with the Arista box managing to get it’s management ports on the front of the box, where Cisco don’t seem to.

The same journalist at El Reg did articles on both the Arista and Cisco launches this week, and they had to have been feeling that same sense of deja vu when looking at the product releases, and when interviewing the product managers.

Arista make no secret of the fact that they don’t develop switching and forwarding silicon in house.

Their niche is in integrating merchant silicon from the likes of Broadcom and Fulcrum into a stable package that users can deploy, and their “secret sauce” is their software, which is surprisingly open for a networking hardware shop – it’s based around Linux, and you can actually touch the OS itself, rather than it remaining annoyingly veiled behind a vendor specific shell that you can’t break out of. With most, you know it’s there, but you can’t touch, but not the case on Arista.

Cisco, meanwhile, have a long tradition of developing their own silicon, being one of the few hardware vendors in Silicon Valley to maintain their own silicon design teams in house. Many others, dispensed with the need to spin their own chips for switching and forwarding with the advent of capable merchant silicon (such as Broadcom’s StrataXGS) around 2002/2003.

So, is the similarity in speeds and feeds just a coincidence, or did Cisco buy in the chips for this one? Well, until someone gets one of them and pries the heatsinks off, we won’t know for sure. Could it just be that this is the limit of what can be made to run in a stable manner with current technology?

While it’s refreshing to see movement in the 40G/100G world, humour me while I take my eyes off the technology for the rest of this post…

One thing which does annoy is the seemingly bizarre lengths to which the marketing and product managers go to in order to differentiate what are essentially the same products, using a combination of weasel words, non-equivalent measures, and creative maths. Let’s focus on power, as energy consumption and heating is a big consideration in these 1U ToR boxes:

Cisco state that the “typical operating thermal envelope” of the Nexus 3064 is around 286W, while it has two 400W power supplies (which being redundant, in theory the worst-case draw is going to be 400W).

Meanwhile, the Arista product manger comes up with a smaller headline number (remember, small is good here) of 125W (i.e. about the same as an old-school tungsten filament light-bulb) by coming up with a bizarre specific config of “64 ports of 10G at 50% load using Twinax copper cables”.

Huh? Given the similarity of speeds and feeds, it’s really likely they won’t be far apart in terms of power usage, so why even bother with this masked charade?

Yes, I know, this is nothing new, vendors have been massaging figures since time immemorial, an old chestnut being the “doubling” of throughput figures for a device by counting every bit of data twice, once on ingress and again on egress. Some  insisted this is correct as the “device is performing two operations on the packet, once on ingress and again on egress”, while others argued that since they did all the lookup and classification work on ingress, counting once was the correct way.

Any good network equipment buyer will see through these numbers and look beyond them, either at the “real” specs, when making their purchasing decision, or will ask appropriate questions along the way. It’s something we’ve been doing for years, in any case, at least for as long as the vendors have been massaging the performance data. However, imagine if this didn’t happen, and vendors didn’t waste time and money in massaging the data to get a hollow “one up” on a competitor? What if there was some clarity in the information you could get, and you could actually have a >50% level of confidence so as a buyer you didn’t have to re-verify everything for yourself?

Why is it like this? Anyone who has been in the industry long enough will know that many marketers and product mangers in Silicon Valley are a pool of people who ride a merry-go-round between the various tech companies. There really doesn’t seem to be any new blood coming in. They leap from one place to another, but don’t seem to be able to “put right what once went wrong”, instead only succeeding in doing the same thing in their new place as they did in their last. The leopard can’t change it’s spots.

I think this could be a missed chance for Arista – not the technology, but how they position themselves. They started out being very technically led, and with some fairly straight talking marketing for an Ethernet switch company, certainly compared to what people had become used to. They let the products somewhat speak for themselves, which they did very well. There was that fantastic interview with Andy Bechtolsheim – which I’ll paraphrase as “switches and networks have become too complicated, why aren’t they as reliable as my iPhone?” – boy, did that feel good to a jaded network architect, used to the same old fluff. I think it’s a shame they seem to have fallen off that particular wagon.

I’ll still readily accept that when you get to a point of selling a similar product to a competitor, as has happened here, you do need some way to differentiate yourself from the competition. Great, but change the record, please.

Rather than falling back on the old staple of massaging the numbers, how about some straight-talking, free of corner-case scenarios and weasel words? I know it’s got to be hard to break out, but what a refreshing change it would be.